It’s been a busy couple of days and I’ve missed two #blogjune posts. Today, I’m flat on the couch and Purrkins is kneading my tummy with very sharp claws. That is all.

I feel rather flat today. It’s been a long time since I had an unstructured day. My job isn’t terribly difficult but it’s busy. We have a good base of regular patrons who use the One Card system to get all sorts of resources in from other libraries. But they are an ageing group and we need to get more people interested in what we offer. There are a lot of things I want to do to get generate more community interest;

What I don’t have is a lot of time to plan. Our teacher/librarian has a very heavy teaching load (which lets me take more responsiblity) but there is always a pile of things to process (and as many to weed), and unruly kids to keep an eye on.

I have a lot of things I’m trying to do at home in my personal life, too. At the moment I’m:

My writing is on hold at the moment but I’m desperate to get bck to my projects:

At the moment i write down ideas and jot down the first draft of poems but haven’t turned them into anything serious.

I would like to simplify things and I need to learn to drop some things (but in a small town there’s not always the people available to take things up). Not travelling to Adelaide for work helps. But when I was in Adelaide i had a day free. I think that I might have to give my marking up at the end of the ear (though I enjoy it, and the money is handy).

But really, all I want to do is spend a week alone in a room somewhere reading,listening to the radio, and eating hot chips on buttered bread and ignoring all other demands on my time.

I’ve been at unhealthy weight levels for many years. Not very wise given that I have health conditions that would benefit from being lighter. That being said, my blood pressure and cholesterol levels are generally pretty good.

I lost weight when I was living in Adelaide. I was exercising more (because I was generally catching public transport to work, which meant a minimum of 40 minutes walking) and followed Michael Mosley’s 5:2 diet. Basically, it involves restricted eating (500 calories) for two days out of seven.

Living in the country is associated with a healthy lifestyle, and I know many people in m local town who are very active into their 80s as a legacy of their years of manual work. But access to health services is often more difficult and country people in general have poorer health outcomes. For me, this was expressed in many more hours of commuting time each week (and consequently less wealking). I also stopped the diet as we moved house and never re-started it.

I still walk to work less frequently than I should. Driving only saves thirty minutes a day but it means I can get home, put on dinner, and start working on whatever project is uppermost at the time. But it’s a false economy. The health benefits I’d get from walking would no doubt make me more productive when marking, writing, and so on.

However, I have managed to get back on the 5:2 bandwagon. I eat a restricted diet on Monday and Wednesday, and keep to around 2000 calories during the rest of the week. On weekends I can eat what I like., which means I can eat with friends and family and not feel that I’m missing out. It’s a slow process but I have lost nearly ten kilograms since February.

Of course, it has been raining quite a bit here over the last few weeks so even with my new-found resolve I’ve had to drive. And we do badly need the rain, so if it means I have to drive for the goos of my local community, so be it….

When I’m not working in my day job I am a marker for a university that teaches library and information studies qualifications. It eats into my time and, for the amount of work that one has to do, doesn’t pay very well.

It also helps me keep up with what’s going on in the industry. I don’t get the time to keep up with the discussions online that I used to and feel that I’ve been eddying in the profession’s backwaters. This has been an excellent antidote.

And now, back to the grindstone.

I started playing D&D in high school (back in 1980) and have been with my gaming group for a bit over twenty years.

This campaign has been going for six years now in a homebrewed campaign setting. The duchy our adventuring party is in us called Whurnumshire, which is beset by, amongst many things, a large invading army. The Yarden (as these people are known) use human body parts to make spell components.

Our party (‘The Legends of Whurnumshire’) have travelled into the mountains to scout out their positions (and perhaps assassinate the leader that has united the normally fractious tribes).

We emerged into the bottom of a large funnel and encountered a large leukodaemon. Our wizard thought that this was the best time to summon a demon (his first time doing so). Surprisingly, our mage kept control of the demon and it helped distract the creature while we peppered it with ranged spells and weapons. My character, Herakleia, (a multiclassed artificer and cleric Minotaur) shot the leukodaemon from the sky.

Best of all, one of our players had tshirts made for us all with our party’s name on it!

And that’s it for today’s #blogjune 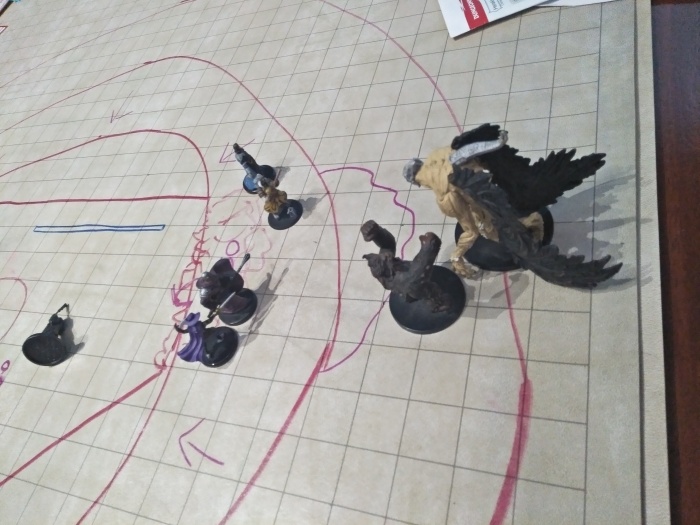 Obviously, I missed #blogjune 2017. A lot has happened since mid-2016. I’m not working as a librarian at the moment but as a Community Library Aide. It’s a melange of library technician/library assistant and employed in a specific setting. ‘Community libraries’ in South Australian country towns are joint-use public library and Department for Education libraries. So it’s an interesting blend of two distinct environments.

Anyway, I’ve been working here on and off since March, 2018. The incumbent has been on leave and I’ve been fortunate enough to have been granted Leave Without Pay from my substantive librarian position in TAFE. It’s by no means an advance career-wise, with longer hours for less pay. However, it scores over it’s more highly paid competitor in two important respects. One – it’s slightly closer to home (cutting my one-way commute from 174 km to 1 km). Two – it’s very satisfying getting to know the regulars (and getting to work with SA’s excellent Public Library Network from the inside). Whilst not perfect it’s a superb service, especially for patrons in small country towns who can now esaily (if not always quickly) access material  from anywhere in the state,

So, I’ll dust off the blog for another year and see what happens. Happy #blogjune all!

This is one of the traffic jams I would sometmes get commuting to my TAFE job.

#blogjune has been spotty, but I have at least gotten some ideas that I want to write about. So, as long as I actually write them, it’s not been a waste.

I have tried to review every book that I’ve read this year, even if it’s only a line or two. Not that I’ve managed that, either.

An interesting story – five police officers are given a tip-off about a possible opium deal. Rushing to the house, a bomb explodes, killing two and grievously wounding the other three. The bomber seems to be an addict revenging himself on behalf of a friend he believed falsely accused and hanged for the shooting of a bystander in an arrest gone wrong.

A fundamentally interesting story about possible police corruption (with strong modern resonances) is marred by Pitt’s long internal monologues. The dialogue, replete with an excess of exclamation marks and a tendency for characters to have ‘exclaimed’ rather than rely on the old ‘he said/she said), tended to come across as a preachy tirade. Consequently, the story felt poorly paced.

This was especially evident at the denouement – which look place in the courtroom – at which point the story ended. There was no sense of how the characters might react to how the events unfolded, nothing to tie the story up.

Fans of the series may also be disappointed that some of the characters that were more central in previous stories are reduced to cameo performances. This is the bare bones of an interesting story that felt rushed to meet deadlines.

View all my reviews

About the author here.

Blogfest at Tiffany's
Create a free website or blog at WordPress.com.